"What does it mean that this place was once historically important but now bears almost no trace of that history? Marget Long does not try to solve that problem or even answer this question, but unstintingly gives us photographs that prolong, refigure and insist on the absence of the historical referent, making the material of history ever more problematic, ever more elusive."
-Elaine Freedgood 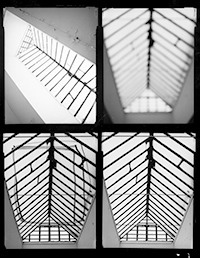 In 2009, I gained access to the vacant building on lower Broadway that housed Mathew Brady's daguerreotype studio in the mid-1850s. Known for both his civil war views and his portraits, Brady was one of the most important photographers of his generation. Inside this five-story industrial building, he and his team of “operators” photographed presidents, senators and ordinary citizens, many of whom were experiencing photography for the first time.

History and its documentation present tricky representational problems. For me, these problems are most acutely realized when the historical subject is the place of photographic production itself. Under his skylight, day after day, Mathew Brady transformed live bodies into hand-held ghosts. With light, silver, and mercury vapors, people were reconstituted as flickering images on a surface. The materials of photography, even in this most analogue of forms, are de-materialized, evanescent. The same could be said of the material of history itself.

All of the work produced for this project—both inside Brady’s building and later in my studio in Brooklyn—is connected to the question of what, if anything, we feel when we step into a "historic" space. And if that space was once a public photographic space, how does it shape that feeling? What exactly is there to visit and where are we trying to go?