The Medium is the Mirage, 2011-present

Since 2011, I’ve explored the vibrant, refractive potential of mirages through a series of interconnected artworks: mirages as the subject of photographs [(Inferior) Mirages]; mirages presented ‘live' in the landscape [Mirage Viewing Station]; mirages as the elusive force inside a photographic archive [Crocker Land]; and mirages as hallucinations in films and other popular, cultural texts [You Were Drifting].

Why mirages? In its most common form, a mirage forms when a steep thermal gradient bends light rays, causing an image from above to appear inverted below. While the image is real, our attempts to make sense of what we see produces illusions: the sky projected onto the ground ‘looks like’ bluish water.

Mirages are supra photographic. They’re large scale, open air, imaging events that work without a camera or a computer. The media of mirages are the earth, the air, and the sun: thermal layers of air bend light and duplicate, displace, or distort the ‘original’ image. Mirages are trick light. Nature’s special effects. Yet despite their crude atmospherics, mirages are deeply felt imaging events and, arguably, an analogue for the mixed sensory experience (both ‘real’ and ‘virtual’ at once) of many digital imaging systems and virtual interfaces we use everyday—for example, the untouchable “content” on a touch screen, or the nowhere/somewhere that we encounter when navigating in Google Earth, where the digital world and the physical world are enmeshed. Mirages are also culturally and historically linked with disorientation and lostness itself: wobbly vision, navigational problems, watery visions on the desert. 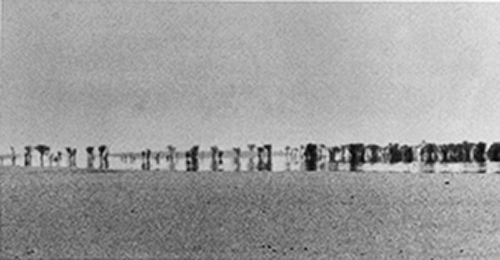 My interest in mirages was sparked by a single picture found in a book on optical effects. The blotchy, nineteenth-century photograph of what appeared to be a shoreline didn’t attract me until I read its caption, “Mirage, Sahara Desert.” A photograph of a mirage! How completely meta, as my students like to say. This was a photograph about photography—the burning desire to fix something for the future—yet simultaneously a picture attesting to its own shifty relationship to index, documentation, and the act of interpretation.

The space and time of a mirage are completely different from those of an ordinary landscape. A mirage is never close; it’s ever receding, always off in the distance. It defies normal laws of movement, perspective, and locatability: run towards a mirage at top speed and you don’t get any closer to it. Get too close to a mirage and it disappears. Mirages are uniquely un-mappable and un-navigable at a time when pinpointed geographic and spatial location systems (such as Google Maps) are held at a premium. Getting lost and being lost are not profitable ‘positions’ in the post-internet economy. Location Services are ON. 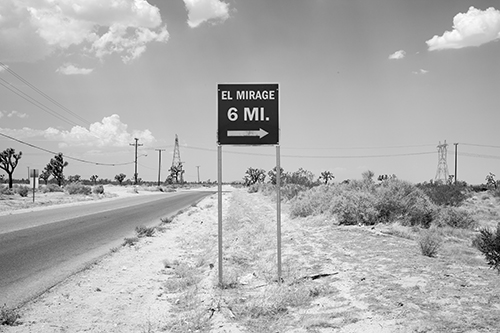 Where do you find a mirage, a “nowhere that is somewhere,” to use cartographer Alesandro Scafi’s phrase? In what kind of real, physical space can you be guaranteed to see an illusion? Mirages are not (yet) visible on Google Earth, and yet Google’s popular mapping interface is quite 'mirage-like.’ Where exactly are you located when you access a place in Google Street View? You are sitting at your desk or on the street looking at your phone, but also simultaneously immersed in the place pictured on your screen. 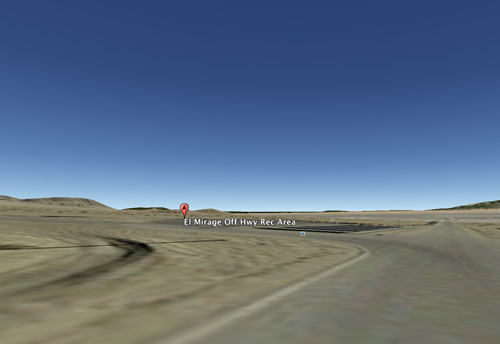 I used place names to find the mirages: Rancho Mirage, California sounded promising; El Mirage Dry Lakebed, even better. I photographed at those two sites in the summer of 2012, and this summer as resident at CLUI I photographed mirages in and around Wendover, Utah.